First published on the Independent 28 April 2018.

It’s a Thursday afternoon and I’m waiting for a phone call from Tom Neuwirth, better known as Conchita Wurst.

I’m sat on my sofa watching The Chase, and by complete chance Bradley Walsh asks the question: “Which country did Conchita Wurst represent at the 2014 Eurovision Song Contest?” Proof, if any were needed, that this Austrian is firmly established in pop culture in a way no other 21st-century Eurovision winner is. I’ve yet to hear Sertab Erener or Loreen namechecked on Tipping Point. Regrettably.

Earlier this month Conchita took the brave decision to talk about her HIV status, something she had intended to keep private but felt compelled to share after an ex-partner cruelly threatened to weaponise that deeply personal information. The revelation, made through her Instagram account, was posted with the hope that she she could control the situation and chip away at the stigma and misinformation surrounding the condition.

This dignified, defiant reaction had echoes of the moment she took to the winner’s podium in Copenhagen and dedicated her victory “to everyone who believes in a future of peace and freedom”. Remember? “You know who you are – we are unity and we are unstoppable.”

That beard may have grabbed our attention but it’s Conchita’s charisma, uniqueness, nerve and talent that’s kept her in the affections of the UK public.

Conchita, it’s a pleasure to chat to you. You’re so well known in the UK now but can you remember your first time here?

I do! I performed at the Royal Vauxhall Tavern – my first international gig. It was the first time somebody outside of Austria had booked me, so that was very exciting. It was months before Eurovision and I performed ‘Rise Like A Phoenix’ and Celine’s ‘My Heart Will Go On’. I also remember what I wore – a red cape and some pants that were very revealing. I think that people could see my behind. I had a great time!

Oh my God, yes. It was a huge honour to play at the Palladium with the BBC Concert Orchestra. I have to be completely honest, sometimes I sit back and I want to pinch myself because I’m so lucky. I ask myself, ‘how can that happen to me?’

You know, whenever I’m on stage I really try to reach for perfection, and obviously that’s hard to achieve so I would go off stage and be totally mad about myself because I hit the wrong notes, or I didn’t do this or that or whatever. But walking off the stage after I performed at the London Palladium, I just had the best time. It was such a new experience for me to walk off and actually celebrate because it went so well and I had a ball. The audience was just incredible. I would do it over and over again, every week if I could.

I’ve noticed on your Instagram and from your performance at the Palladium that we’ve not seen Conchita wear a dress for a while… is this a conscious decision?

It’s a little bit ‘been there, done that’. I celebrated my female side during the last ten years or so when I started doing drag. I just had so much fun with Eurovision and with everything that happened afterwards, I really understood that this stage persona that I created had so much potential to go in so many different directions and I just work myself through every inspiration I have. I started out as being a diva in a golden dress and now to a more bearded drag artist guy in boots.

Thinking back to when you won Eurovision in 2014, and comparing it to today… where does the line between Tom Neuwirth the person and the character of Conchita Wurst intersect?

I think that the lines are definitely blurring more than they used to. Especially around the Eurovision time when the win happened, I was very, very clear where the borders are and I was very clear about how to talk to me. I wanted to be called ‘she’ and ‘she said’ and ‘she did’ when I was dressed as Conchita, so I really made it a thing, a rule that everybody had to follow. And over time I just evolved, and I became more and more comfortable in my skin.

I do what I feel at the moment and I dress how I feel at the moment, and this goes now towards a more masculine look, so it’s probably closer to my private persona, to my everyday life as Tom. And as Tom, I really do enjoy that nobody recognises me on the streets, I love it.

Of course, there are people who would clock me right away, but most people don’t and I really enjoy it because nobody needs to see me dancing at four in the morning on the bar, nobody needs to know that it’s me.

Whether you’re male or female, masculine or feminine, why do you think drag is such a powerful tool for self-expression?

Some people would say that it allows you to show this side of you that is probably too much in some situations. For me, that’s just ridiculous because you should always celebrate yourself in every situation that you’re in.

If you’ve got the chance to really speak your mind and do what you feel and express yourself how you want, then this is freedom. Drag is freedom. I think that anyone who is in any way creative or is creating something, whether an architect or fashion designer, I think if you have the opportunity to create something that is fully you, it frees your mind and your spirit and gives you the opportunity to really find yourself. This is what drag does to me.

Do you watch ‘RuPaul’s Drag Race’? You must do?

[Shouting] Of course! Ha! What a question! I mean Shangela won over Trixie – any thoughts?

I mean, I love Trixie, don’t get me wrong but Shangela got robbed. What do you think?

I love Ben De La Crème but… [deleted: two minutes of cackling and ‘Drag Race’ conspiracy theory chat that nobody needs to read] …which is why it was so hard for Shangela to nail it.

Poor Shangela. But you know what? It made good TV.

Absolutely! How could they be so mean to Shangela?

Oh, I love Shangela. So yes – I’m very much into RuPaul’s Drag Race.

Has RuPaul ever approached you to be a guest judge?

Well, they did approach me after the Eurovision win but there was just no chance to go to America at that time. But the other thing is, I really have so much respect for the girls, what they do, and I really would not consider myself, especially not these days, as a ‘drag queen’.

On the other hand what is drag and what is not? But what these girls are doing is so much more effort. I don’t shave my legs, I have no padding going on and I hot-glued on my lace when necessary. I don’t do a face transformation with my make-up, I just paint my face like I want it to be.

These girls are incredible. They’re a few months away from home – it’s a commitment to a whole other life. I just sit there and watch them and go ‘wow’, it’s unbelievable what they’re pulling off and they’re so good.

I have so much respect for these queens and I’m a huge fan girl – I follow them on Instagram and I fan-out like everybody else. And yes, I do have the privileged situation that when I write sometimes they write back and we have a meeting and I get to know them. I’m sorry for everybody else but I do play the celebrity card! I don’t care! I need to see them because I’m a huge fan.

Spill the tea! Who are your top 3 this season?

Well I really fell in love with Miz Cracker. She’s hysterical and I absolutely love her. Aquaria, I want her in a sandwich and to eat her alive – she’s so delicious! He’s so gorgeous as a boy and stunning as a queen. Oh, and Eureka, I love Eureka! I love Monique, I think she’s just so funny. There’s so many that are really good, it’s a fabulous cast this year.

Reckon we could convince Jon Ola Sand [executive supervisor of the Eurovision Song Contest] to commission a ‘Eurovision Drag Contest’?

If it’s Eurovision then they would have to sing, right? Or like a huge drag contest? The concept of every country sending a drag queen and they bring to the stage whatever they have, alright, that would be fun!

Maybe you could judge that?

Of course! I have been off and on involved in conversations where it was about RuPaul’s Drag Race Germany or Drag Race UK but I don’t see myself as being a serious judge on one of these shows because I don’t do what they do. I think to be, like the head judge of a Drag Race anywhere you’d really need to know what drag is, and I think I’ve only scratched the surface – I’m doing my thing but it’s not what these American girls are doing. I can host it, guide the audience, but I wouldn’t want to be the judge!

You’re too nice – you’d be the Miss Congeniality.

Ha! No, I do have opinions, but I think that my opinions are definitely not enough to be the head judge of a drag competition show.

And what about your opinion on who’s going win Eurovision 2018?

Germany could have won it had they sent Ryk with the song ‘You and I’. You must listen to it. This song was so good, he would have been the best contestant in Lisbon but Germany went with a different choice.

I would run with Netta from Israel. If she wins I will love it. The first time I heard ‘Toy’ [Netta’s track] I was like, ‘Oh my God, this is so good, so incredible’, it’s a little bit Bjork, it’s a little bit quirky. But then I have to say the chorus, to me, was a disappointment – it becomes a little bit obvious. Again, who am I to judge? I had a song that was called ‘That’s What I Am’, so it doesn’t get any more obvious than that! But y’know that’s just my taste. 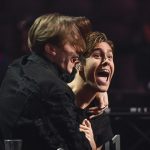 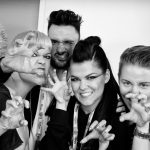 Why’s Eurovision such a big deal for the LGBTQ+ community?